Welcome back Rangers to our second installment of Tactica Thursdays, last time we discussed the movement phase. This week we are going to focus our attention on building a proper Command Roster.

What's in a Roster?

So you have a few games of kill team under your belt and you are feeling on top of the world, then you come up against something that is unexpected and you are not prepared for it. You actually may not have felt like that, but I will admit it took a while for the concept of the Command Roster to sink in myself. If you are playing matched play then you need to sit down and make a Command Roster for your Kill Team that is comprised of twenty models that are available to you. Points at this point don't matter because what you are doing is preparing for your next match, tournament or campaign. This is the time to make sure we have all of our grounds covered, but what exactly are all the different grounds to cover? First thing we should look at is what kind of weapon options we have available to our specific army, if you are limited to a certain amount of gunners you should probably take all the different combinations of that model. I will use Dark Eldar for my example, the Kabalite Gunners are allowed to take either a Blaster or Shredder, and another one is allowed to take a Dark Lance or Splinter Cannon. We can only have two max gunners on the table when we play our match but that doesn't mean we can't have all four options in our Command Roster. This is one of my favorite parts of Kill Team so far, because it gives you options on how to deal with your opponent whoever it may be.

If we are dealing with a horde Kill Team, they will usually have average stats with low armor saves. A blaster and dark lance would pierce through them effectively, however it isn't as efficient as we would want it to be. The task better suited for the job would be the Splinter Cannon and Shredder combo that way we are shelling out more shots to potentially take out multiple units in one turn. In the reverse order if we are dealing with an elite Kill Team then we want those high strength, high damage outputs so that we can kill at least one unit a turn. 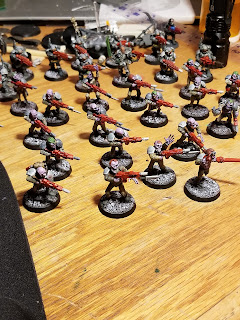 It's a Horde of Zombies!

Not only can we fill our Rosters with all the best toys that will come in handy for all different match ups we can think of, we should look at some of the combos we can deal with the Specialisms. You can only have three on the field at a time, but we could fill our roster out with only specialist. (Don't plan on winning much with 4 models) Some of the specialist often pair well with each other, such as Comms and either Sniper or Heavy, the plus one to hit with either of their natural perks are fantastic. Running a Veteran, Combat and Zealot for an in your face hit squad also sounds amazing, but it may not have full potential if it's just going to get shot off turn one by your opponents gun line.

There are going to be times when you just have bad match ups and having all the best options to deal with everything you can mitigate the damage to potentially help you achieve victory. Some armies with the more expensive guys will have an easier time building list, but if you rely on horde then sometimes you will have to really think about your specializations. I believe that you can find all the best synergies with a lot of though and experience in the game. Campaigns are a great way to balance between fun and somewhat competitive play, just make sure you only start off with twelve guys on your command roster.
Posted by Blackheart at 7:48 AM